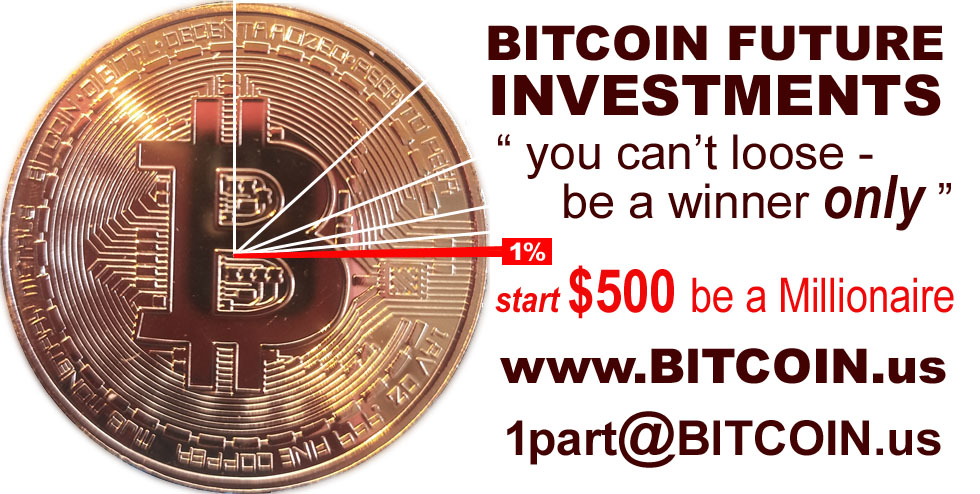 > this is JOHN's investment in BITCOIN's <

JUST A LITTLE-BIT MORE - OF INFORMATION:

What do I call the various denominations of bitcoin?

Unlike most currencies, Bitcoin amounts are highly divisible. This has led to a desire to create names for smaller denominations of bitcoin amounts, especially since transactions involving whole bitcoins are no longer quite so common. Bitcoin is decentralized, so there is no organization that can set official names for units. Therefore, there are many different units with varying degrees of popularity. As of 2014, the most common units are bitcoins, bits, and satoshi: 1 bitcoin = 1 000 000.00 bits = 100 000 000 satoshi.

How does the halving work when the number gets really small?

Eventually the reward will go from 0.00000001 BTC to zero and no more bitcoins will be created.

The block reward calculation is done as a right bitwise shift of a 64-bit signed integer, which means it is divided by two and rounded down. The integer is equal to the value in BTC * 100,000,000 since internally in the reference client software, all Bitcoin balances and values are stored as unsigned integers.

How long will it take to generate all the coins?

Even if the allowed precision is expanded from the current 8 decimals, the total BTC in circulation will always be slightly below 21 million (assuming everything else stays the same). For example, with 16 decimals of precision, the end total would be 20,999,999.999999999496 BTC.

If no more coins are going to be generated, will more blocks be created?

Absolutely! Even before the creation of coins ends, the use of transaction fees will likely make creating new blocks more valuable from the fees than the new coins being created. When coin generation ends, these fees will sustain the ability to use bitcoins and the Bitcoin network. There is no practical limit on the number of blocks that will be mined in the future

Where does the value of Bitcoin stem from? What backs up Bitcoin?

When we say that a currency is backed up by gold, we mean that there's a promise in place that you can exchange the currency for gold. Bitcoins, like dollars and euros, are not backed up by anything except the variety of merchants that accept them.

It's a common misconception that Bitcoins gain their value from the cost of electricity required to generate them. Cost doesn't equal value – hiring 1,000 men to shovel a big hole in the ground may be costly, but not valuable. Also, even though scarcity is a critical requirement for a useful currency, it alone doesn't make anything valuable. For example, your fingerprints are scarce, but that doesn't mean they have any exchange value.

Alternatively it needs to be added that while the law of supply and demand applies it does not guarantee value of Bitcoins in the future. If confidence in Bitcoins is lost then it will not matter that the supply can no longer be increased, the demand will fall off with all holders trying to get rid of their coins. An example of this can be seen in cases of state currencies, in cases when the state in question dissolves and so no new supply of the currency is available (the central authority managing the supply is gone), however the demand for the currency falls sharply because confidence in its purchasing power disappears. Of-course Bitcoins do not have such central authority managing the supply of the coins, but it does not prevent confidence from eroding due to other situations that are not necessarily predictable.

Why do I have to wait 10 minutes before I can spend money I received?

Blocks (shown as "confirmations" in the GUI) are how the Bitcoin achieves consensus on who owns what. Once a block is found everyone agrees that you now own those coins, so you can spend them again. Until then it's possible that some network nodes believe otherwise, if somebody is attempting to defraud the system by reversing a transaction. The more confirmations a transaction has, the less risk there is of a reversal. Only 6 blocks or 1 hour is enough to make reversal computationally impractical. This is dramatically better than credit cards which can see charge-backs occur up to three months after the original transaction!

Ten minutes was specifically chosen by Satoshi as a tradeoff between first confirmation time and the amount of work wasted due to chain splits. After a block is mined, it takes time for other miners to find out about it, and until then they are actually competing against the new block instead of adding to it. If someone mines another new block based on the old block chain, the network can only accept one of the two, and all the work that went into the other block gets wasted. For example, if it takes miners 1 minute on average to learn about new blocks, and new blocks come every 10 minutes, then the overall network is wasting about 10% of its work. Lengthening the time between blocks reduces this waste.

As a thought experiment, what if the Bitcoin network grew to include Mars? From the farthest points in their orbits, it takes about 20 minutes for a signal to travel from Earth to Mars. With only 10 minutes between new blocks, miners on Mars would always be 2 blocks behind the miners on Earth. It would be almost impossible for them to contribute to the block chain. If we wanted collaborate with those kinds of delays, we would need at least a few hours between new blocks.